The Good, the Bad and the Fugly 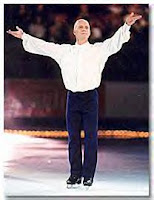 Now that the holidays are over, I can take a breath and catch up on the silliness in the news.

Peeps. They just boggle the mind, don't they?

Well, not really. She thought she found Jesus. But since I don't think anybody really knows what Jesus looks like, it's just as likely to be Scott Hamilton and Kristi Yamaguchi, isn't it? 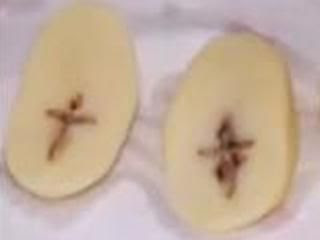 This woman is my kind of bad.

She and her boyfriend are about to take a shower together.

Except that he wants to include his dog in the bathroom for some reason (my mind doesn't EVEN want to go to some of those places). She says no. He insists.

She says, "I don't think I want to be your girlfriend if we have to have your dog in the bathroom while we're taking a shower together."

He says, "I think my next girlfriend will appreciate my dog more." And calls her a name.

So she punches him in the mouth. He gets hurt in the ensuing melee.

She ends up with a second-degree assault charge.

He ends up being known as the creepy guy who got his ass kicked by a naked girl.

I'm sure he and his dog will be very happy together.

Geraldine Magda went to the nursing home to say goodbye to her terminally ill sister.

After she left, other relatives noticed that the dying woman's wedding ring was gone from her left hand---the hand that Magda had been holding shortly before. So they called the police.

Later that day, the police confronted Magda, asked to search her purse, and found the ring inside an empty prescription bottle.

"I have no idea how that got there!" she exclaimed. She's been charged with two felonies.

Fugly is probably the kindest word I could use. Sheesh!

Labels: The Good the Bad the Fugly

I love your news updates.
When people do things that they shouldn't they seem to not even know how it happened.

Sometimes I do a search for good news and you know, it's not that easy to find.

Have a great week Miz ATM!!

Punching the creepy guy was the second best thing she could have done! (Leaving being the best, obviously)

Eeewww to the spud (potato)
Why is that woman in jail? He's the sick one!
And what a bi-arch to steal her own sister's ring! That's just low.

I think theres a special corner of hell just waiting for Magda.

And naked girl, he had it coming!

Ugh!!!! Those are pretty awful.
I'm with mrs. g. The naked girl was right and Mr. Dogman is creepy.

These are about real people? Yikes! Very fun to read about. But I wouldn't want them as neighbours!

Those stories were great! I just loved the one about the potato! I burst out laughing!

Oh god...these are too funny!

I'd read the one about the woman, the "boyfriend" and the dog...

the other two stories were hilarious...especially the potato one... ;-)

Great stuff!
The things people do!

gosh - taking that ring was really taking the cake, weren't it? Vulgar!

I don't blame that other woman, either - that dog/shower thing was just too much.

I don't understand why you are berating the naked man. He is obviously the victim of a domineering dog.

It's ridiculous the need of some to see Jesus in everything - I love your version much better and so accurate!

That woman should have stopped after the first punch and kick in the nutts!

You are brilliant to have seen those figure skaters in the potato. Absolutely brilliant.
I'm not sure where such a talent will take you in life - but I'm very impressed!

Hi Attila,
Thanks for posting these three funny stories; I needed a good laugh and you certainly provided it! I’m going to inspect my potatoes to see if I can find redemption-Hallelujah!

He he, the second one is hilarious!

That spud totally looks like Hamilton and Yamaguchi! I'll alert the media.

i just want to know one thing:


Thanks for the laugh, it was much needed! ♥

You never fail to amaze me with your Unbelievable, but True Stories. I think you could write a book on all of these wild and crazy people.

Pretty low to steal your dying sisters ring. I'll have to keep a closer eye on my potatoes! As for the dog in the shower....well, I think it sounded too kinky for me. Glad she punched him out.

Have a good weekend, thanks for making me smile.

OMG! The Good made me snort my morning coffee thry my nose... The Bad made me throw up my toast... and the Fugly made me shiver....

that was great! thanks!

Congrats and condolences on him turning 21!