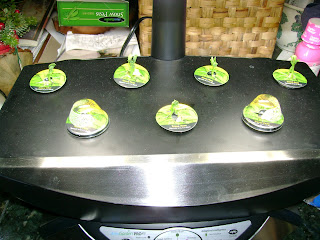 Well, it's been a month since I plugged in my--uh--"snowpea" garden, and here are the results!

Week 1, they started to sprout. Except that bugger on front right. 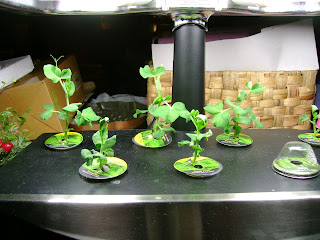 Week 2, they're all growing at a pretty good clip, but that guy on the right never did anything, so I replaced him with some herbs. Chives, that is. ;-)

Week 3, I took some pictures, but they have somehow disappeared. At least I thought I did, but I was sick that week. Maybe I dreamed it. 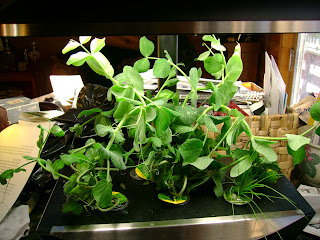 Week 4---look how huge they've become so far! The snow peas are pretty aggressive and aren't being very nice to the little chive guy. When I wake up in the mornings, there are little tendrils around the chives as if the snow peas are trying to strangle the life out of them.

So far, it's been a pretty painless experience. You can almost sit and watch the stuff grow!

As you can see, the crap on the counter has grown as much as the plants have. I'm off to do some tidying!

Here's my latest faux-pas on Disaboom if you feel like checking it out!
Posted by Attila the Mom at 3:52 PM

This is so cool. You inspire me, I'll have to try it.

Hi Attila,
Your Aerogarden is awesome! Did you ever imagine that you’d have a thriving indoor snow pea garden in January??? Are you going to move them out on the porch when the weather warms up? What would happen if you put the chive plant in the middle of all the snow peas? It’s actually a high-tech “gro-lite”, which became popular during the Hippie era for cultivating cannabis.

I’ve got several anemic plants due to the continual rain and cold right now; I’m going to look into getting one. Thanks for your informative and colorful post!

This looks like fun, but I'm afraid it would take too much counter space, but those snow peas will be great in season! That's so cool!

Cool!!! Shame about the chive ... maybe you should move him?

I have a black thumb. They'd all be dead if I had them. Luckily, they got you.

Oh sounds like fun. My son and husband are making sunflowers grow.
Can't eat em but growing stuff is fun

Thanks all, for your comments!

Miss Litzi---since it's basically a one-piece electrical unit with grow-lights, I wouldn't be able to move it outdoors (plus, it wouldn't be warm enough up here until maybe mid-June!). Hopefully I will be enjoying lots of snow-peas before then!

Plus, I don't think it would work on existing plants. It's a dirtless system. The seeds come in a little grow-cup, and the roots grow down into the water-bowl. At this point, I wouldn't be able to switch the cups without damaging the roots---either by pulling them out or trying to put them back in. ;-)

There is a way to grow your own seeds in there if you don't like what the expensive kits have to offer. You just have to pick the right plants---I'm just dying to try some dwarf eggplants next!

Hi Attila,
I Googled “Aerogarden” and have a much better idea now about how it functions. It’s a fascinating concept and obviously works, judging by how well your snow peas are doing. For someone living in a climate like yours or in place with no yard, it’s a perfect way to have a bit of “nature” inside all year round. Everyone could experience a bit of a “green thumb”. One problem might be what “Stinkypaw” mentioned; taking up a lot of counter space…but that’s probably something you could work around (finding a spot for it).

If you do grow some dwarf eggplants, please take some photos; I’d love to see them. Happy Gardening!!!

I would have had a "perfect place" for it, except that fully-extended, it would eventually meet resistance by the bottom of a cabinet!

Essentially, I stuck it on the most convenient place, because I was so excited to have it and wanted to get it going as soon as possible. Plus, we're having some--eh--track lighting issues in the kitchen lately (amazingly enough, they are no longer making the weird-sized bulbs that fit into the custom track-lighting that was put into this house in 1984, so we're going to have to re-wire it all) and the Aerogarden lights up like a moon-station.

Basically, you can stick this thing anywhere out of a draft. I'm so enamoured by it, that I'm thinking of asking for another on my birthday in a couple of days. :-)

I am impressed with your green fingers!

I would so do that if I didn't have black thumbs.

Cool. I was curious to see how this thing worked. I may have garden envy now, I'm seeing green...

Oh, and your faux-pas? Too funny.

Yup, those are chives. I studied the pictures very carefully.
Great piece on Disaboom. Amazing how well they listen to what we don't want them to hear.

Ah the seed nightmare. I try every year. I can never understand why they grow at different rates, same soil, same treatment, same seeds.......why do they have to be all so independent, don't they know the meaning of same.....
Cheers

I love the idea of a "Snow Pea Garden" on your countertop! I checked out there website and it looks like they now have a smaller unit that you can grow flowers in. Check it out:

Wow, that is really cool. It worked out very well for you. Totally stress free, except for the little chive attack. I don't blame you for wanting another one. I will have to check these out, I think even I can handle this!!
XOXO

well don't you have quite the green thumb! i am jealous! i really cannot garden/water plants to save my life!

It looks great, all healthy and growing so fast! You'll be eating peas before you know it.

I ordered my garden stuff the other day and some plants for the flower beds. Your aerogarden makes me want to put some seeds in something!

Hi Attila,
LOL! Your abode may turn into one giant “green house” with Aerogardens in every available space! At least no one in the family will go hungry if you continue to grow edibles. How much longer before you can enjoy your snow peas?

I’m constantly running into the same problem you’re experiencing now with no longer being able to find things that fit into my 45-year old house. Anything that needs to be replaced has to be custom made because the old fixtures are passé. It’s frustrating, annoying, time consuming and expensive. Simple repair jobs become major hassles….

It's soooo cool! I want one too!

"Phlegmfatale" has the best name ever.

And she also said what I was going to say.