Now on to Switzerland! 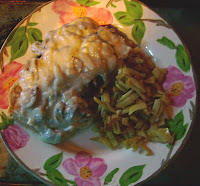 Every time we go to European Cuisine (not it's real name)---the place of my infamous depantsing---I order the same thing. Zurich-style veal. Yumm.

After another trip to the restaurant recently, we realized that the 3-hour wait for your meal is de rigueur, because the darn place was practically empty.

I guess they round up the baby cows and kill them on the back porch while we're waiting for the sommelier to stomp on some grapes. The chairs are danged hard too, and designed to give you the unbearable urge to cut the cheese (kind of like pews in church). While waiting for our meal, I had to excuse myself twice to go outside and release the barking spiders. But that's another story. ;-)

I really love this dish, but can't bear the wait, so I decided to try to make it on my own. I looked around on the web, found several recipes, and kind of combined them to make a recipe as close to what I had as possible.

I'm assuming it comes Switzerland or some other spaetzly-eating country because of the name.

1 pound veal (I used scallopinied veal because that's all I could order in our podunk town).
You could also use chicken breasts or thin-sliced pork steaks if you're opposed to the baby cow thing.
1 onion diced
1 lbs sliced mushrooms
flour for dredging
butter (since this recipe calls for a lot of butter, I used Smart Balance 50/50 blend)
2 tbs flour for sauce
2 tbs corn starch
salt
pepper
white pepper
thyme
2 cups sauvignon blanc (or some other white wine)
2 cups half and half

Salt and pepper the dredging flour to taste. Dip the veal in the mixture and saute in butter. This won't take long if the cut is scallopini. Remove from pan and keep warm in the oven.

Saute the onions and mushrooms. When cooked through, sprinkle with the two tablespoons of flour. Stir briskly until absorbed. Pour in the two cups of wine, pinch of thyme, a little salt and a little white pepper. Bring to a boil while continuously stirring until it cooks down, making a brownish-gravy. Turn the heat down to low/medium.

Stir the cornstarch into the half and half until it dissolves, then pour the whole thing into the pan. Turn the heat back to medium and mix well. Let it simmer until it thickens. Taste it to make sure the cornstarch is cooked through. If it's chalkyish---you need to let it cook a bit longer. If the sauce is too thick for your taste, add a little whole milk or water to thin it out.

I wanted to make spaetzle, but it looked like a lot of work. LOL So I cheated.

Since the ingredients looked pretty much the same, I used a bag of fresh-frozen egg noodles. I boiled them per directions, then cut them up into bite-sized pieces.

Then I sauteed them in butter, nutmeg, salt and white pepper until slightly browned on the outside.

Serve with sauce on the meat, the spaetzley stuff on the side.

This is a very rich dish, and needs a salad and veggies to balance it out. I'd skip the bread course. ;-)
Posted by Attila the Mom at 1:42 PM 6 comments:

So, we didn't actually get to go away. The last couple of years have been pretty rough financially---it's hard to own a small business in a climate that isn't friendly to small businesses.

Things have picked up in the last couple of months, and Hubby has been working 6 days a week. We decided it would be stupid to go away while the work is coming in like gangbusters. My brother has offered his services as a caregiver (he's a former EMT and since he and his girlfriend couldn't afford to get away either, they'd love to come and stay up here in the mountains for a few days) so maybe we can run away for a break in the fall.

But that doesn't mean we didn't make the most of our two weeks! Hubby and I spent late afternoons drinking wine and playing in the pool without kids, rented disgusting horror movies, and ran around nekkid and scared the dogs.

I got a chance to make some recipes I haven't used in awhile, try a few new ones, and make up some of my own too. The best part is that Hubby did the kitchen cleaning after I spent the days cooking, and we took a culinary trip around the world!

Why did we stop there? Well, because that's where Barbara Walters films The View. Not that I watch it, mind you, but I really love Barbara Walters' mother's Stuffed Cabbage Roll recipe. I haven't made it in years, because it's a bit time-consuming, but oh-so-worth-it. A friend gave me the recipe when I was a new mother, but I found it online.

Plus I've been doing something kind of nutty lately (maybe will share in another post sometime) and have ended up with about 20 jars of Welch's grape jelly. Had to figure out how to use some of it up. LOL

First up, here is the recipe, which has otherwise been known as "Little Green Fart Nuggets" by the men in my family. 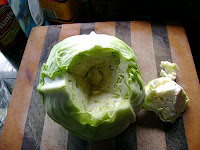 The only changes I made? Instead of pouring boiling water over the cabbage, which necessitates using two containers, I just boiled up a big pot and threw the heads in. Then I used two forks to peel back the leaves when they got soft. 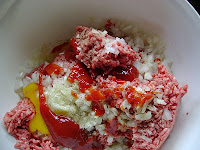 The other change I made was to cut up twice the onions needed. I put some in the meat mixture, and put the rest on top (forgot to put them on the bottom until after I had already rolled the little suckers). It turned out better---at least to me---because they got nice and brown and caramelized in the sauce. 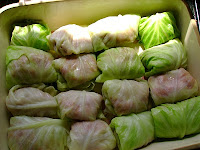 The cooking time is long---almost 3 hours, but don't skimp on it, because then the cabbage leaves will be tough. 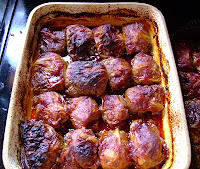 When they're done? Sheer bliss! They are the most tender, scrumptious, luscious, juicy---ok, I better stop there. It's starting to sound like I'm describing the heroine's boobs in a Nora Robert's novel. ;-)

Finally, FINALLY going to get a little R & R.

Little Guy's summer has just been awful. With Big Kid in and out of the hospital and staying here to recover, the month of July was a total bust. Couldn't invite friends over to swim (especially Hot Cutie) because of the risk of contagion, and all invitations dwindled as well. Mono has a 4-6 week incubation period, and who knew if Little Guy had caught it?

So he spent the time working and earned enough to pay for a plane ticket out to California to spend 2 weeks with his bio dad. Last week he was away at camp, and yesterday he flew on a plane by himself for the very first time. I'm so proud of him!

Tomorrow, the movers are moving Big Kid and Kitty into the mobile home. It's taken about 3 weeks, but the renovations are finally done. We ended up tearing out ALL the carpet and having tile installed in each the rooms. Although the bedroom carpets looked promising, when we pulled them back, they were very nasty underneath. We put in a new air filtration system, a dishwasher and did some cosmetic work, so the place looks pretty spiffy.

The Aspiring Adult is busy working two jobs and has a social life, so we don't see much of him. Hubby and I are going to try to spend some quality time together, and hopefully be able to get away for a few days.

Until then, I'm going to do some of the things I've been dying to do---master the art of making Chinese dumplings and pot stickers from scratch, learn to make the perfect Chili Relleno, have morning coffee in my underwear....

I'll post some pics. Well, not of me in my underwear, of course. You'd all run screaming from the room after your eyesballs exploded, and wouldn't THAT be a big drippy mess? LOL 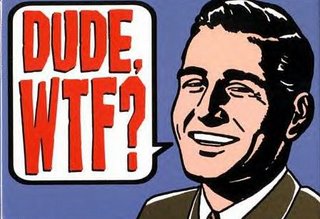 A Montana teen texted her boyfriend that she was going to crash her car into oncoming traffic in an effort to commit suicide. Shortly thereafter, going 85 mph, she crossed the center line and crashed head-on into another car, tragically killing the pregnant driver and her young son.

She was charged as an adult (17 years old) for deliberate homicide. Right now, the case is being decided as to whether she should be prosecuted as a minor or an adult.

In the meantime, she and her father are suing the estate of the VICTIM for damages, citing that the accused "suffered permanent and continuing injuries, along with mental pain and suffering and the loss of capacity to enjoy life. It cites future loss of income and past, present and future medical expenses. Winter is seeking a judgment against the defendants for damages, costs, pre-judgment and post-judgment interest and other relief deemed appropriate."

WTF? I mean seriously. "Loss of capacity to enjoy life?" Didn't sound like she was enjoying life much when she TRIED TO KILL HERSELF AND TOOK OUT A COUPLE OF OTHERS IN THE PROCESS! Gah!

In another matter, 4 guys rent a canoe to enjoy a river ride. Being dumbasses (or just being doods, take your pick), they come up with the brilliant plan to jump off a railroad trestle that bridges said river into the water.

3 guys make it. 1 does not. He was hit by a train when he tried to outrun it.

Now his mother is suing the railroad and the canoe rental company for damages.

She's suing the railroad company because they couldn't stop the train fast enough.

Uh yeah. Everybody knows you can stop a zillion tons of steel on a dime. It's a train, fer pete's sakes, not a mini cooper.

She's also suing the canoe company because they "knew or should have known" that stupid people jump off of train trestles that go over rivers so they shouldn't be renting canoes.

It seems kind of obvious that critical thinking isn't an inherited trait in that family.

Well duh. It prolly wouldn't have happened if the victim hadn't climbed up the train trestle, ya think?

From the "That Really Takes Some Balls" department:

A guy in Seattle admired a totem pole he saw in a park. Instead of having one made for the house he was building, he convinced a crane company that he was the city arts commissioner and was having the 18-foot pole restored. So they took it down and delivered it to his house. It didn't fit in the guy's garage, so he hid it.

Took 8 months and a trip to Oregon to get that sucker back.

WTF was he thinking? WTF are any of these people thinking?

A bloggy friend sent this to me in email: 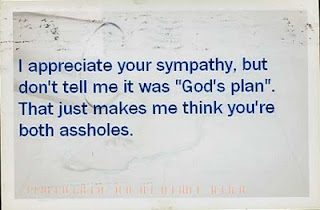