You Can Get EVERYTHING at Walmart! I Mean EVERYTHING!! 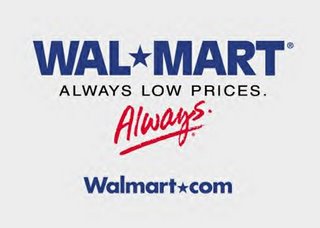 I just had to write something about this funny happening at Walmart.

A couple of months ago, on a message board I belong to, everyone was posting their good/bad/odd experiences at Walmart. There was a heated debate about how Walmart goes into small towns, swallows up what business the old mom and pop stores have, how they treat their employees badly, etc.

People posted a rash of recent weird Walmart articles reported in the news including the lady who was unloading her groceries and had her toes licked by some nutjob who was hiding underneath her car.

A couple of weeks ago, Brittany Miller of Ogden, Utah came out of Walmart with more than she expected.

She was shopping with her grandma, went in the bathroom and Whoa Nellie! started to give birth.

Employees sent out a 911 call, and an EMT happened to be across the street.

He used fresh towels from the Martha Stewart Collection...no nevermind, that's Kmart (but I'd bet Martha would use the PR if she could! She'd probably show us how to make the placenta into lasagna and string a tennis racket with strands from the umbilical cord) and shoelaces to tie off the cord.

The mother, Brittany, "had no pain, nothing".

In fact, she didn't even know she was pregnant.

Ok, well I've heard stories about this since I was a teenager.

Scary legends about women who give birth without ever knowing they're pregnant. In some cases I'm inclined to believe it. Stranger things have happened.

She was only made aware of it when someone noticed a blood trail that led to her. Then everyone raced back and found a baby in the toilet.

My first thought was..."Well eww, gross! Was she one of those nasty slags who crap in public toilets and just walk away while never bothering to flush?"


Did she at least wash her hands before going back to serve food?

My second thought was, "If I plopped out a 7-pound *turd*, I think I'd take the time and LOOK at it before flushing. Maybe give myself an "atta boy!"

I'd probably take a picture of it and send it to the Guinness Book of World Records!"

"I guess I believe it because Brittany comes from Utah, a state where in some instances vaginas are confused with clown cars."

One of my best friend's sister was pregnant for nine months without anyone knowing (she was 16 and living with her mother at the time wearing large shirts to hide the terrible truth of her condition). She waddled to the kitchen after eating Christmas dinner and her Mum said; 'Geez, youve put on weight luv' and with that she let out a great sigh and went into labor.

A similar thing happened to my auntie Liz. She was 19 when she got pregnant with my cousin Sam, not married to my uncle Pete and still living at home.

And she managed to keep it a secret from for the whole term.
Our side of the family knew about it. Sam was a very small baby and she hardly even put any weight on so it was easy for her to wear baggy shirts to hide the evidence.

The first her parents heard about it was after she gave birth and she asked Pete to phone them to let them know she'd just had a baby girl.

Wow...
Born in A Walmart Toilet...
I guess Kalie's life can only get better if that's where she started...

People can give birth without noticing? Well, that's new - for some reason the expression 'throwing a sausage down Oxford Street' comes to mind LOL

Well, if you're gonna have a baby somewhere, why not Wal-mart? It beats having one in the back seat of a car.

I can understand women being able to hide their pregnancies,,almost, (not me, even my head looked pregnant.)but being pregnant and not having some glimmer of an idea, and then giving birth without realizing it? When I gave birth they heard me in the suburbs!

And we let people like this check our groceries?

These people should be used as living donors. But they can keep their brains, we don't need those, or what is suppose to be there in the place of brains...yeah, they can keep the space at the top of their spinal columns.

I had a friend who had a baby and never knew she was pregnant. She had cramps, thought she was miscarrying, sent her 4 year old to get the phone and while she was getting the phone my friend had the baby. I saw a pic of this friend 2 weeks before she had the baby. She was wearing a bikini and had no belly. The baby was small but healthy.

I'm jealous when I hear women who say they had no pain.

I'm with Brenda...but then my son weighed 10 lb 6 oz! Ouch! Believe me, I KNEW I was pregnant the whole 9 months and then some!

I'll NOT have what she's having.

Whoa. It does leave me in disbelief that there are women who are utterly shocked to have given birth.

what *is* it about this particular urban myth? it's beyond annoying, non? I could smack the bitches that propogate it, b/c how could anyone try to play off the nonexistence of reality that accompanies childbirth?

hi. we live in a world rife with idiots.

p.s. your funny makes my tummy ache. I like it.

It truly happens ALL of the time. Denial is a powerful force in the human mind. They don't acknowledge it because they don't want to believe it and have to deal with an unplanned pregnancy. It is not an urban myth, it is a survival skill for some women. I honestly feel compassion and sadness for them. Children are such a blessing.

So when is Wal Mart putting in the birthing center and ped's office? I mean they have just about everything else, from food to pharmacy to eye glass to automotive....

I hear stories like that all the time. A friend of mine was 8 months pregnant with twins, and she only found out when she went to hospital with stomach pains. Twins!

I'm not falling for this "I didn't know" story she's pulling. There is NO way a woman could NOT know that she was giving birth--Being pregnant, perhaps--Giving birth? I highly doubt it.

I came across these posts and their dated, however in case someone else like me comes across them I thought I'd add my two cents. I carried a baby unknowingly and the birth was quite painless. The only was I knew was the water leaking. My son was born 10 wks premature and weighed only 3 lbs. I've had bowel movements that hurt a whole lot worse than any labor I had. He is now 14, 6' tall and 180 lbs. Not impossible folks!

i know this was posted a long time ago, but i just recently heard of this incident....from brittany herself. i've known her since i was about 14 years old (she's a year older than myself).....anyway, i don't believe it for a second. i remember an instance in high school when she knew she was absolutely pregnant, and that she was having a miscarriage. the ambulance came and took her away, then told her she was never pregnant. anyway, i don't believe it. i'm gonna see what she says about it though.