You might not know who Kevin is, but he's a very funny, sweet (and somewhat demented) guy who blogs (NC-17).

Recently he blogged about an exchange with a creepy neighbor. I commented with my thoughts that maybe the neighbor was hitting on him.

Kevin wrote back and said, "I think I might just have puked a little in my mouth."

Well that's all I can say about the following.

A week or so ago I wrote about what seems to be a really gross trend in "new" fusion cooking---peanut butter hot dogs, KFC [yuck] "Famous" Bowls, etc.

I guess when it rains, it pours. In other words, once you discover gross, it just comes flying out of the woodwork to slap you repeatedly upside the head.

A New Zealand winery produces a wine that gets rave reviews from the critics. One enthusiastic taster (I'm not kidding!) describes its essence as "a whiff of cat's pee on a gooseberry bush".

I had a friend who had 4 unneutered cats who pissed all over her apartment. I KNOW what unfiltered cat's pee smells like. My eyes water at the memory, and not with fond nostalgia.

You'd have to cut my head off and pour this brew down my spurting stump to get me to ingest anything with a whiff of cat's pee. Yuck!

Some lady who, in my opinion, either smokes a lot of dope or has arteries as clogged as the Cleveland Tunnel came up with 50 recipes for a Twinkies Cookbook.

It includes Lasagna and Burritos.

How in the HELL do you make Lasagna out of Twinkies? I can't find ONE ingredient in a recipe that can be substituted with yellow sponge cake and vanilla cream filling.

The same with burritos. Do you add chocolate sprinkles on top of the green chili sauce?

Now we come to the most heinous of atrocities. Assault on ice cream.

Years ago, when I was in a Mexican restaurant, I was offered Cinnamon ice cream. I've always been a bland French Vanilla girl.

I thought it was weird, was completely dubious, but found it to be delicious.

Since then I've been willing to branch out to the more exotic (Try Ben and Jerry's Neapolitan Dynamite!), with no disasters.

My little mind was opened.

Until I stumbled across The Wackiest World of Japanese Ice Cream. Now I have to quote my friend Kevin Charnas again. 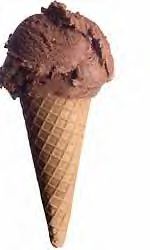 "I think I might have just puked a little in my mouth."

I LIKE Soy Sauce. On eggrolls, on dumplings, on rice and meats. I love it's versatile smoky saltiness.

The thought of eating it frozen with cream and sugar makes my short hairs stand on end.

To quote the critics, "You can get it straight from the horse's mouth, this would have to vie for the vilest ice cream ever created. The chunks of meat inside it offer ample proof of why horseflesh is usually used in dog food."

No No. no.
I still can't get the image of the twinky cookbook from my head.
Is there a forward in it from the Twinky defense dude?
Geez
And frozen soy sauce?
Yes, we must all quote your friend Kevin.

Have you heard about the civet poop coffee? Yes. They eat the coffee berries and then shit them out. People of unsound mind, and apparently viable business plans, gather up said fecal matter and sell it to consumers who literally put that shit in their mouths and swallow. Seriously, google it. Just spreading the vomit around ;-)

I agree. There are just certain things that do not go with ice cream.

The civet poop coffee is also the most expensive coffee in the world I believe. Great post!! LOVE the Japanese site!

Me---I cannot for the life of me figure out how someone would come up with an actual twinkie Lasagna. I still have the shivers!

T.Willie---I've never heard of civet poop coffee---monkeys yes! Or am I being woefully ignorant by not realizing they're the same thing? ;-)

Kim---I can't believe they have goat ice cream with meat chunks in it. arrggghhhhhh!

Those ice cream flavours sound positively vile. I'm a Cookie Dough girl, always have been, always will be!

Is next Thursday good for you? Say, noonish?

That is just vile beyond words.....all of it!

Cat's Pee!! I, also, knew someone with several cats....and let me say that one visit to her house was enough for life. Yuck!

I have to go find some mouthwash now.

Oh thank heavens we don't have twinkies over here. As for the wine, I wonder how much they paid the taster, smelling like cats pee, is natures way of telling you the grapes were not up to it and the wine isn't even worthy of cooking use. Horse flesh ice cream... excuse me I need to go to the bathroom!!!

The name of Ben and Jerry's ice cream is a hoot!

I was watching the Iron Chef America a few weeks ago and one of the chefs made ice cream with olive oil in it. There is a guy here who makes ice cream geared towards pregant women. I think the worst was made with anchonvies. I've heard they're a huge hit.

My best guess for Twinkie Lasagna: Line up a row of Twinkies in a lasagna pan and cover them with cherry topping or some other red fruit topping that looks like tomato sauce.

I can't imagine anybody would actually put tomato sauce on Twinkies, unless they drank too much cat's pee wine. Hee.

One of the award winning restaurants in England has a fusion chef. Their website is http://www.fatduck.co.uk/

He has smoked bacon and egg ice cream on the menu. I remember seeing him on tv prepare brocolli with a white chocolate sauce.

WHAT'S WRONG WITH THESE PEOPLE??? JUST DISGUSTING! TWINKIE RECIPES? Cat-piss finish on wine??
and SOY SAUCE ICE CREAM??? ARE THESE PEOPLE MAD? MAD I TELL YOU!

Up in Gilroy, California (the garlic capital of the world) they have garlic ice cream. mmpphhf.

Again, I think I may have just puked a little in my mouth...and I'm poised to punch the inventors of these travesties.

Thanks for the link and honorable mention! :)

OMG. Someone is actually a worse cook than I am.

Eeek! Thanks for making me puke in my mouth a little. Did I say a little? I meant a lot!

exhibits a-z as to why I make this blog a mandatory stop on my regular tour du blog are in quotes above.

The KFC bowl of goop on the tv ads has caught my attention more than a few times. I have to wonder how on earth they come up with some of this stuff. Down here in the south we're all about some gravy but holypooponastick for all that's real, that's digusting to watch!

Kevin needs to stop puking in his mouth. I have such a visual, I've lost my appetite, lol.

i don't think i can look at food the same way ever again!

I can always count on you, ATM, when I need to be fully grossed out! Yuck. Cat pee?! Maybe he comes from a land where cat pee smells good. That's just gross.

Guess being English has its drawbacks after all...

there are some SERIOUSLY wrong things with the world...Pippa

I mentioned this once before but there is a local place here that features roasted garlic and almond chip ice cream. It is my absolute favorite.