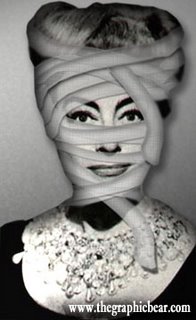 I love my mom. She's a wonderful woman.

But if she asked me to prop her corpse up in front of the TV after her death and live in the same house with her until she resurrected herself, I'd take her on a vacation to a nice soft hotel room with a complimentary robe that ties in the back.

A Cincinnati family and caretaker honored Johannas Pope's "wishes" by leaving her dead body in front of a running TV and air conditioner in an upstairs bedroom for 2 1/2 years. The caretaker "visited" Johannas daily, spraying her with air freshener and insecticide to deter maggots as the body decayed and then mummified.

When friends and relatives came to visit, they were told that the corpse was "too ill" to see them. The air conditioner broke 2 months ago, and old Johannas started to get a little stinky. A suspicious relative finally called the police to do a wellness check, and upon investigation, they found---well---Mummy!

No charges have been filed. The county coroner determined that Johannas died of heart disease, and there is no law in Ohio that requires the reporting of a body.

There is just so much wrong with this that I have no idea where to start. 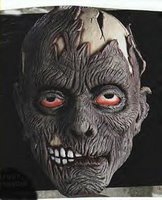 How could any reasonable person live in a house with a decomposing corpse upstairs?

Did any of them ever manage to get a wink of sleep? Every creaking board at night would scare the crap outta me.

If I managed to snooze, I think I'd have nightmares of waking up to see a progressively decaying Mom (ala American Werewolf In London) sitting by my bed waiting to have conversations about Brad and Angelina's latest escapades.

Beyond the "ewww--dead body!" factor, you simply cannot convince me that even with the air freshener and insecticide, there was NO odor up until the time the air conditioner broke down.

How the hell could anybody eat in that house? Is that smell my roasted pork sammich, or is it eau de Mom? Yuck! 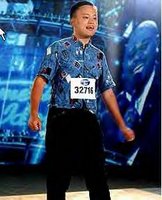 And what's with keeping the TV on all the time? Worried that she might miss the latest episode of American Idol?

I wonder if Johannas' house was paid off and caretaker and daughter were living there rent-free. I wonder if some pension or disability check cashing went on there as well--which required a living, breathing Mom to collect.

For the very life of me, I can't think of any other inducement (and even that wouldn't be enough for me!) to live in a house with a corpse.

Then again, maybe they're ALL crazier than sh*thouse rats.

So Mom, it's not that I don't love you dearly, but I hope this dispels any notion of a future move to our spare bedroom.

You might have luck with one of the siblings, though. ;-)
Posted by Attila the Mom at 10:30 AM

Martha claims she has been living with a corpse for several decades now.

I love the second photo. Your other half?

It's Poe-y. Wait a minute.
Wasn't there are Hammer Horror movie, with Vincent Price . . . ?

Someone just had to be doing some serious check fraud. Nobody loves their mother that much.

This is so disgusting but FUNNY!! Don't you think they could have at least put her in a freezer?

Freezers are wet. TV's are electrical. Mum could have been electrocuted whilst watching Tales from the Crypt. Bummer.

Perhaps DRY ICE for the dearly departed? The family could have brought in a sculptor to create a shrine while trying to preserve the body.

You guys are sick. But in a nice way. LOL

I'm with you on the creepy factor. I can't help but assume that the corpse would ultimately reanimate to perform some divine retribution for some wrong or another I've committed.

Also, I'd be afraid that my cats would eat her.

Oh, yeah, this is good to know especially since I'm from Ohio...

I got me some big afterlife plans to make now!(rubbing hands together menacingly)

This is good stuff, I'm sticking up a link to you on my blog.

Well Love, you know about my recent loss, you must be telepathic, as it would appear my dear departed Father-in-Law, aka the Fat Controller is probably coming to 'stay' with me for a while. Don't panic, he will be nicely sifted and stored in his very own little box. But there won't be any TV. Like I say you must be watching as I was drafting that post today. For those of you that don't know me I have a rather irreverent view of life...and death for that matter. Attila, You wanted to know the significance of the Fat Controller. See the post in January of the 'list of players'.

Check fraud and free rent make the most sense. Maybe they were smoking some dope while they were at it.

That probably would cover up the smell! LOL