Asshat of the Week 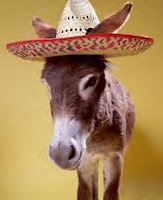 I haven't done an Asshat for awhile---not because there weren't plenty of them, but because maybe there's just a kinder, gentler me.

Ok no. That would be lying. For the last year I've just been drifting in sort of a cloud of ennui. I think that what my good friend Kim Ayres said in my last comments section about getting a protective emotional layer stripped off when facing a tragedy holds true.

I avoid engaging in stuff that pisses me off, because I already have enough scary emotions to deal with.

Life goes on though, and I need to get over it.

So this week's Asshat goes to AOL commenters.

I have AOL, and now, after 13 years, I pretty much loathe it. BUT I have a lot saved on here. I don't want to lose any data, and I don't want to spend the time changing it over to something else.

Please don't comment on all the better things I could have. I've researched it, and just don't want to go through the hassle.

I click on the links on the welcome page if something catches my fancy. Many articles are inane and totally tork me off with the piss-poor writing and content. Some are interesting. What is consistent is the incredible ignorance and hatefulness of the number of AOL users who bother to comment on articles.

In practically every article, some nincompoop has to make it about race. Or immigration. Or Obama (If the article is about Scarlett Johannson's bikini wax the comments run to how it's the President's fault the rainforest is shrinking). Or their so illiturate thet u cayunt unnerstan wa thar talkin bout. And then there's the large percentage who don't read for comprehension.

Holy crap. It's scary to think these people can vote.

Last night I read an article about Baby Jessica McClure turning 25 and coming into the trust fund that was established by well-wishers when she was stuck in that little drainage hole. She's a married mom of two now.

Her parents were very young poor people when it happened. Over the years, AS her parents, they could have made all kinds of demands on the trust---we need a bigger, better secluded home (mansion) to keep us from the media---we need fancy cars to tote her around in, etc, etc.

Think of Michael Jackson and all of HIS hangers-on and their demands. Or any of those child stars (Gary Coleman, Patty Duke come to mind) whose parents' spent their children's earnings/assets on themselves.

But Jessica's parents didn't do that. The principal of her trust---800K---is pretty much intact.

So now that she is getting it, here is the gist of some of the AOL comments: She doesn't deserve it because she married someone of Mexican descent. "How dare she have some money to put in her little brown babies' college funds!" Gah!

Yes, Jessica got a windfall from people who were touched by her plight when she was a baby girl. Yes, it's easy to be envious of the whole thing.

But these comments are ugly. And stupid. It makes you wonder where in the hell these people come from.

So this week's Asshat goes to those ignorant, racist AOL users.
Posted by Attila the Mom at 6:25 AM

I have noticed a lot of similarly stupid comments on news websites that I read.

800K! That is awesome. What a blessing, and what a blessing that her parents didn't drain it out of selfishness. I don't understand why people would take such a feel-good story and turn it into a race issue.

Rest assured inane commenters are all over the net. I frequent many news sites and the craziness/stoopidness [sic] is everywhere! The other dominant theme is MEANNESS. So, I laugh at the stupidity and don't know what to feel about the meanies. I agree it's scary that a lot of these people have the right to vote. There should be some sort of test you have to take beforehand. Oy!

People will turn anything into a race issue.

Anyway your asshat of the week, from some time ago, stopped me from using the suffix 'tard for anything.

Well I do make an exception for mustard and petard.

I'm also stuck in AOL hell. I've explored changing, but what a hassle. I don't often click on the links, but I've seen a few of those loony, hateful, half-assed comments when I have. I like them as your choice for Asshat of the Week, but I don't think those kooks are exclusive to AOL.

That sort of nastiness and stupidity seems to be on every website where readers can leave comments.

My brother in law, who was disabled and legally blind, died in a house fire a few years ago. The comments people left following news articles made me sick. They said things like "another free loader off the payroll". Disgusting.

So often I find total idiot comments on major website. It makes me wonder if people are really stat dumb or if they truly don't have anything better to do with themselves.
Sheesh. jj

What horrid people!
I'm sure that young mother will do something wonderful with the money, for her family and herself.

Common sense and compassion seem to be missing on the world wide web. I assume these people have never gone through anything near tragic.

Oh boy, that is terrible. What ignorant comments...

Is it bad that I read some of those less than intersting AOL articles for the comments?

Oh and you forgot my personal favorite...

"I like this and so does my boyfriend. He is 73 year older than me LOL. We met on www.lovesaggyballs.com"

Or at least that is what I think they say....

either one merits your award.
Nice job on this one- loved it!!
I, too have been an AOL follower since beginning of time when I used to have to wait hours to get through the perpetual busy signal ;-(

Very early on in my Internet experiences, I tried AOL and deleted it within a week. I couldn't take all the shite thrust in my face every time I logged on. I like kickstarting Firefox and looking at nothing but the near-empty Google page and deciding for myself what I might like to see, read or investigate.

The big problem with the mass of ignorance shoved under our noses is the righteous indignation it provokes. We want to yell and shout at the screen and write down scathing comments that will make these people think twice before they write such crap again.

But it never works. They never change their mind, no matter how accurate, reasoned and true our arguments are. I don't think I've ever swung someone round to my point of view who didn't already agree with me.

So now I rarely get involved in debates on the Internet, and when I do, I always keep that wonderful XKCD cartoon in mind - http://xkcd.com/386/

It never fails to amaze me, how many people, have nothing better to do then sit around firing off nasty comments.

I am obviously quite old because I remember the whole Jessica incident quite well.

eToro is the ultimate forex trading platform for newbie and pro traders.