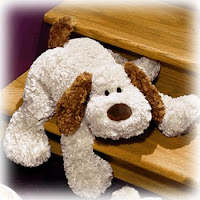 This being the holiday season, I thought a cautionary tale about the effects of drinking too much demon eggnog might be in order.

Ever hear the term "Coyote Ugly"? Not the forgettable movie, but the term. It comes from the idea that a coyote stuck in a trap will chew it's own paw off to escape. In the same vein, it's a description of the "morning after" when you wake up next to the [koff] babe you picked up at the bar the night before.

You're so horrified that you'd rather chew your own arm off to get away than wake him/her up.

So this guy (who wasn't named in the article) in Winnepeg was so drunk that he broke into a couple of garages and rooted through some stuff. A concerned homeowner called the police, who eventually found the guy passed out in somebody's boat, with his Coyote Ugly by his side.

Except that his date wasn't alive.

It wasn't even human.

It was a stuffed dog.

"He was lying there with his genitalia exposed next to the stuffed dog," said Crown attorney John Peden. "While the police report doesn't describe it this way, the dog might be appropriately characterized as now being anatomically correct, as opposed to its condition before he removed it."

Ok, I have to admit, I laughed hysterically when I read that.

"All (his offences) involve being drunk, usually drunk as a skunk."

The authorities actually had to take a DNA sample in their investigation of the plush po-po perp.

Of course the article quoted a psychologist who talked about stuffed animal fetishes, which made this seem ever so creepy. I found it when I was looking for a picture of a stuffed dog.

So let that be a lesson to you!

If the Elmo you bought your kid for Christmas starts looking like a Tickle Me George Clooney...

Put the eggnog down!


Here's my latest on Disaboom, if you feel like dropping by!

In his defense, if anyone said to him, "Your girlfriend's a real dog," he'd totally be able to say, "No, she's not."

Yuck. Amusing, but still yuck.
I'm thinking... can anyone be that drunk? He had to have noticed...

Oh that is just too gross. LOL

Hi Attila,
LMAO! I wonder if this guy’s predilection for plush animals manifests itself only when he’s wasted or if he’s a perv 24/7. Perhaps Ty™ is appealing to adults and kids with their Beanie Babies. I may have found a whole new market that would be interested in purchasing my old collection…

To each their own.

I just read your Disaboom entry and ATM, I really love your lads, sight unseen! They're sure lucky to have you as their momma.

Where do you find stuff like this? I linked this to my blog with credit to you.

Don't send him our way, we have lots of stuffed animal toys here!!! EEEEEWWWWW

I don't know which is worse.
-snickers-

people never cease to amaze me!

I read your other post over at Disaboom... I think Little Guy is so lucky to have you for a Mom :)

I hope your family had a wonderful Thanksgiving!

There's no eggnog in this house. BUT there's a bit of whiskey. I just have to say is EWWWWWWWWWWW.
*shudders*
Poor lil' stuffed dog.

Well here in Scotland, no one was quite sure whether the bike consented or not

Another reason I am so glad I don't drink!

I don't know that I will ever look at a stuffed animal the same way, now. And, I will make sure to hide them all away before coming home from a bar! ;)

I've heard of all kinds of fetishes. Except for this one. Ew.

A stuffed dog? That's nothing!
A man has been placed on the sex offenders’ register after being caught trying to have sex with a bicycle.(Telegraph.co.uk 10.31.07)

LOL, that's hilarious! To be fair though, we've just had a guy in the news for trying to have sex with a bicycle.

If you participate in sexual relations with stuffed animals....you MIGHT be a redneck....oh wait, either that or a FREAK!

This is not surprising, after all he was drunk in Winnipeg, come on! Give the poor guy a chance! ;-)

But in all seriousness, I just don't get how one can be "that" drunk!

Damn. Sounds like some submarine sailors I used to sail with.

That's my hometown for you.

That is pretty high up there on the yuck factor!! Very funny, but also very yucky. How can you be that drunk? Don't think I want to know.
XOXO

Can you imagine being the investigator who had to take the DNA sample? What a job.

I read your Disaboom post. My parents didn't take me to get a driver's license when I was in high school, presumably for similar reasons, although they never explained why.

Little Guy is more social than I was. I didn't pay enough attention to the other kids' activities to notice that they were all learning to drive, so it never bothered me that I wasn't.

I did eventually learn how to drive as an adult, though.