I Love the Smell of Smackdown in the Morning... 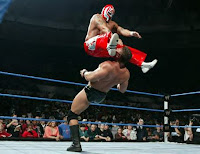 Well, no, not really.

Little Guy has a few obsessive peeves that just drive him into the stratosphere. One of them is the term "stop". There is no rhyme or reason to it, it just is---like the fact that he is scared to death of bare feet, even his own. Yeah, I know that's weird, but I recently read an article that the actor Will Smith (Independence Day, Ali, etc) has a bit of a bare foot phobia too, so at least he's in good company.

You can say "quit it", "don't do that", or "please refrain from..." and he'll---uh---stop whatever it is he's doing without a qualm. For some reason, the word "stop" really freaks him out.

If he hears it in passing, or even on the TV, it will sometimes send him into a frenzy of indignant questions.

"Are moms allowed to say stop? What about strangers? Would you hate me if I said stop? Would my teachers get mad at me? Are teachers allowed to say stop? Can I tell them not to say it? Would they hate me? Would you still love me? Why are those people saying stop on TV? Are they bad people? Are they mean people? Are they like Miss Trunchbowl (in the movie Matilda)? Why are they saying stop?"

Although Big Kid is doing really well right now (no aliens laying eggs in his digestive tract, no butt tumors, no rage attacks in his underwear out on the front lawn), he is still Big Kid. As I've said before, there IS no pill to treat "asshole". He likes tweaking on his little brother, just for the joy of being a bonehead.

What Big Kid doesn't seem comprehend yet is that his "little" brother is now as tall as he is (and still growing), and is a pretty freaking fit muscular dude. The "picker on-er" is now finding out the hard way that his former "pickeree" is able to kick his butt from here to next Friday if he has a mind to.

You'd think that he'd get the idea that it's not too smart to mess with the Little Guy.

But no. If you've read my blog for the last year or so, you know the history. If not, just trust me. Big Kid is like the Energizer Bunny. He doesn't learn from his mistakes. But he keeps going, and going and going.

I can lay out this scenario with my eyes shut and both hands tied behind my back because it happens at least twice a week.

Little Guy is such a huge Golden Girls fan that he often relays stories to us from school in the way the character Sophia Petrillo did. So here goes:

5:45 a.m. on a school morning in the kitchen of our home in the mountains. I'm stumbling around, trying to make high octane coffee.

Little Guy gets up, makes his bed, goes to the bathroom to wash, brush his hair and teeth, gets dressed, puts his backpack by the front door, puts his shoes on (he has a routine), puts his lunch money in his pocket, makes his breakfast and sits down to eat it at the breakfast bar.

I'm still waiting for my coffee to come out of this really crappy coffee maker I bought last year when my trusty Mr. Coffee (18 years old) finally pooped out and died. So at this point, I'm either in the bathroom or outside sneaking a cigarette.

Big Kid senses movement on his planet and gets up. Due to some of his meds, and his refusal to even TRY to get on a regular sleep schedule (he takes 2 naps during the day, so he's up and down during the night---and although we're trying to fix this---we're just grateful that he isn't breaking things and spitting on us), he has to join in.

He sits down next to Little Guy and the games begin.

"Whatcha eating?" he asks in a friendly voice.

Toast and yogurt.
"Is it good?"

Go make your own.
"Can't I have just a bite?" Big Kid wheedles.

No!
"How about if I just take some?" He reaches for Little Guy's plate.

Leave. Me. Alone!
"Mom, Little Guy is making faces at me!"

"Stop antagonizing him", I warn. "Let him eat his breakfast in peace."

"I'm not doing anything! I can sit here if I want! He's making faces!"

"I'm not doing anything! I just told him to (here it comes again) STOP!"

"If you don't like it, get up and leave. There's no reason for you to be there, and Little Guy has to finish his breakfast and catch the bus!"

Little Guy is placidly finishing his breakfast, not a hair out of place.

Big Kid has been knocked out of his chair and is laying on the floor holding his arm and screaming like a girl.

You'd think after getting his butt whooped twice a week he'd get the point sometime, wouldn't you?

P.S. I absolute don't advocate violence in any way, shape or form. Little Guy has never hit, pushed, pinched or kicked any other person except his brother and only in situations like these.

We talk about alternatives and how hitting is unacceptable, but Big Kid refuses to acknowledge that to a person who has autism words can have the physical effect of blows. Chanting "stop" over and over is akin to striking his little brother in his brother's mind.
To hear Big Kid tell it, he's an innocent victim who was minding his own business. At these times I seriously contemplate giving him a bunny-slipper enema myself. A hard one.
Posted by Attila the Mom at 11:31 AM

Labels: Bad Ideas, The Kid Who is Not Related to Us

This had me cracking up! I go through almost this exact same thing AT LEAST twice a week with my 7 and 9 year old boys. And some mornings the up the fun-o-meter by involving their 4 year old sister. Oh the joys of being a mom.....{sigh}.......

You could not have described it better.........I actually felt like I was sitting in your kitchen. Hystercial. I remember going through the same dramas with my girls. Glad to know it was not just my kids!

Hi Attila,
LOL! You really should write a modern version of “Life With Father” by Clarence Day (1935), aptly titled “Attila’s Little Huns”. Like I’ve stated previously, there never seems to be a dull moment around your house. This is a marvelous post; thanks for the laughs.

Watch out where you stick your bunny-slipper…you may live to regret it!!

You have a child with a routine and who sticks to it, I'm in awe and I'm SO jealous! There's a fight in this house every morning about eating, brushing teeth, and getting dressed. Zach can, and has, taken 30 whole minutes to put ONE sock on.

well, kids squabble - that's what they do, and that's how they learn to resolve conflicts later in life. You just have to hope they survive their childhood (and YOU too!)

LOL That sounds like my house in the morning.

BTW, Mr Blogs isn't keen on feet either - they should all form a foot haters club and make Will Smith the patron.

I'm not a supporter of physical fighting between siblings but RIGHT ON, Little Kid! It seems that Big Kid needs to learn the power of the word "STOP"!!

Ah, memories...
I was absolutely appalled when my eldest two would physically fight. On occasion, I'd throw myself between them! (It actually worked - you don't hit your mom, even by accident...)
The fights ended - thank God. They're great buds now. Guess it was all due to that sibling rivalry phenomenon when younger.

A bunny slipper enema????
Oh my goodness...
I just snorted up my high octane coffee Attila!!!!

It is a difficult one isnt it!

I remember telling my #3 son that all 3 of his brothers (2 older, 1 younger) picked on him because he squealed so good. Stop squealing and start kicking ass, I said. He never did and to this day, they have fun with him. Not so much physical anymore, thank God.

Teenage boys are just little boys in big bodies. The worst day in #1's life was when #3 laid him out on the floor with a bloody nose. *sigh*

I'm laughing when I know I shouldnt.

Its a rite of passage that every older one torments their younger ones....but tehre is a fine line.

That's your problem, you're getting them up too damn early!

when my kids get in to it its usually ugly, thank God they are past most of the physical stuff and have moved on to disrespect and insults lol

i know its wrong to encourage little guy but ...yayyy! :)~

My younger brother used to be like Big Guy, and would just torment the shit out of me until I snapped and hit him. Naturally since I was the older and MUCH larger brother I got in trouble....until my Step-Mom caught him.

He was poking me and prodding, me while we lay on the floor and after 1/2 an hour of me saying "Knock it off" or "You better stop it" I had to reach over and slug him in the arm (When I was 16 I was 6"2 235 played football, lifted weights...I knew how to hit), and then he ran screaming to Dad, and my step mom intercepted him and told him point blank that she had watched him the entire time and he is lucky to only have been hit in the arm, as she would have beat him like a rented mule.

I love that woman.

I don't speak to my sister anymore. It's very peaceful after thirty years of putting up with what amounted to mental cruelty that I was encouraged to "ignore" or "get over." Thank goodness some parents recognize the unfairness of this.

It sounds like you turned your back just in time

That bunny-slipper enema might do the trick, but from the sound of it I doubt it!

I had my two 5 years apart on purpose so they would fight less than my brother and I did. My worst moment was when said brother asked what "Strangle" meant and I showed him.
My two fight but so far no punches.
I don't envy you!

I understand the "stop" thing... growing up we were not allowed to say Shut Up. We could say "Silence yourself Dammit" ( we thought we were so clever throwing in the swear word) but no shut ups EVER

Ohhh, I sooo recognize this... My oldest (12) is always after youngest (9). Asperger versus Asperger. And it can go on for days and days...
Youngest had punched oldest in the past and it didn't work (I also don't like violence, but I sooo understand it!)
Oldest is freaking out by youngest behaviour ("normal" people can deal with it, autists can't).

Sometimes I wonder what I have done wrong in my past life, that I have to be punished with 2 asperger kids in this life... But your delicious humour teaches me how to deal with it!