Tiny Voices In My Head

A couple of days ago, our friend Annie Drogynous wrote a post about Pat Robertson's yearly chat with God. It reminded me of my very first blog entry on January 31, 2006, because I too wonder why God chooses to talk to only a select number of people, and wonder how these conversations actually take place. Since it's almost my one-year bloggaversary, I decided to repost it. :-) 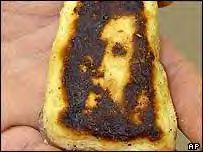 One morning, I reached into the fridge for breakfast stuff. As part of my New Year's resolution, I promised myself that I'd try to start each day with something healthier than a cup of high-octane java and a cigarette. I'd just stocked up on Egg Beater's, low-fat cheese and veggies the day before.

A little voice said, "Eat the macaroni and cheese." I looked around. Huh?

It spoke again. "Eat the macaroni and cheese."

I'm still not exactly sure why, but I put the Egg Beaters back and ate the macaroni and cheese.

Later that morning, I was organizing some things in the fridge--ok, so I was eyeballing some leftover pizza--and happened to look at the expiration date on the *brand new* container of Egg Beaters (something I've gotten in the habit of doing on occasion since this is something my oldest, who has OCD, obsesses about). It had expired almost a month ago.

Wow! If I had made an omelet as intended, I might be booting my breakfast for the rest of the day!

Where did that tiny voice in my head come from? Am I suddenly a psychic? Am I nuts?

What if it was a message from God?

When I was a teenager, I had a discussion with a friend about faith.

"...but how do you know?" I remember asking her. "How do you really know that He exists?"

"Because I prayed to Him. And He told me so," she said.

Well, uh... how the heck do you argue with that? I was stymied. On reflection, I should have asked for details.

With this in mind, I've paid particular attention over the years to those who purport to have divine conversations, or claim to know "the will" of God.

I'm dying of curiosity. How come God speaks to some and not to others? How do these conversations take place? I'm pretty sure Dan Rather would come out of retirement if thousands of talking bushes burst into flames across the globe.

Does God take the form of human strangers and walk up out of the blue, as portrayed in the now-defunct television series Joan of Arcadia?

Does He appear in dreams, and if so, how do you know it wasn't the Spicy Kung Pao Chicken from the night before?

Does He write messages on the fridge with alphabet magnets?

What was Oral Roberts doing back in 1987 when he got one of many (supposed) taps on the shoulder by The Almighty? Was it something mundane like taking out the trash or clipping his toenails?

"Psst, Orrie! Get me 8 million smackaroos by March or I'll have to whack you!" That makes me imagine God as a celestial Tony Soprano.

Last August 31st, Muhammad Yousef Al-Mlaifi, a high-ranking Kuwaiti official, published an article which basically said that Hurricane Katrina was sent by Allah to punish the US. "The Disaster Will Keep Striking the Unbelievers for What They Have Done".

Barely a month later, a catastrophic earthquake devastated Pakistan (with a population that is 97% Muslim), tragically killing around 73,000 men, women and children. We haven't heard anything further from Mr. Al-Mlaifi.

Is that because Allah sent him a candy-gram that said, "This is for opening your yap, ya big bonehead?"

I don't have any answers. I like to think that God is talking to all of us, even the most "unworthy", if only we'd take a moment to listen.

I like to think He's talking to me in the mornings when I'm greeted with a glorious, technicolor mountain sunrise.

I like to think He's talking to me when I get an overwhelming urge to take an elderly person's grocery cart back to the cart corral on a slippery, slushy day, especially when I'm feeling tired and harassed.

I'm pretty sure that He's talking to me when He allows me to witness my prickly, status-conscious son take his brother's hand to help him cross the street, even in the presence of a teenage girl who he's dying to impress with his machismo.

So who knows? Maybe--just maybe, God sent me a direct message in a tiny little voice.

"Eat the macaroni and cheese!"

Now if only He'd go tell Calista Flockhart to eat a Big Mac. Or three.

I believe those voices are our spirit guides. Sadly they never tell you where to get that winning lottery ticket....Mine would tell me to go to the post office when it wasn't massively crowded.It's weird the first time you hear it isn't it?

You know the saying, "The devil is in the details?" Well, maybe it's God who is in the details - all those small moments we tend to take for granted or overlook (like your eldest son taking the hand of your youngest.)
(I think I have to make a point of listening harder - I wouldn't mind having a chat with Him myself.)

I think that God exsists only in the mind of the people that are weak minded enough to think him into exsistance and giving him imaginary powers of the unexplainable.

Basically....if he does exisist I can't wait to meet him because he has a very dark sense of humor, and if he doesn't I can't wait to see the look on the believers faces when they are floating in a vaccum wondering what happened to their 72 virgins and angels floating on clouds playing a harp....That is some funny shit!
Either way I'm gonna be laughing my ass off!!

Yeah God's like an old Italian uncle. Sometimes he offers you some words of wisdom and advice, other times he's giving youa boot to the ass or a smack to teh back of the head.

Thats how I see it.

Me again - was just looking at my Junk Mail and saw a message from Jesus. Subject - "Jesus wrote:"
At the risk of downloading a virus I opened it since I'd just read your blog. Ya never know! Maybe via e-mail?
It was about "Physicians Adult Daycare." Huh?

wow- Roger Daltry in a omelette!

Congrats on your bloggaversary! Yeah!

Eat the macroni and cheese.
hee hee. I love that line.

Hey your blogaversary falls on my birthday? How cool is that?

So true about God talking to all of us...it shouldn't matter what religion or nationality.

God spoke to me, telling me that he doesn't exist. Should I believe him?

I don't know about God, but I remember every time I couldn't find something I'd lost my mom would say, "Say aprayer to St Anthony" It would drive me crazy, then, some 20 years laterI'm on vacation in Naples, Fl, walking on the beach, hot I take my shirt and shoes off and just stand in the waves 10 yards out, 3 miles back down the beach, the condo gate is locked and my keys are gone...All the way back I said Anthony my girl's gonna kill me where are my keys...they were sticking up out of the sand...I just ask for Tony now!

Whenever I find myself questioning why God "lets" things happen to good people, I am reminded of what my preacher says all the time. "God is much more concerned with our character than our comfort". Of course, I think Carm's idea of the Italian uncle is helarious! Very thought provoking!

PS: I think it takes a very strong minded person to have faith. It is extremely easy to doubt!

I think he does speak to us in tiny, often odd, ways and shows us miricles every single day,,the birth of a child, the changing seasons, it's just amazing.

That's awesome about the mac 'n' cheese... who knows what mysteries are floating around out there?

LOVED the post but you saved the best for last when mentioning Calista Flockhart should eat some Big Macs. Big Macs and some fat injections I'd say!

Thanks for the mention!

You wrote "I like to think that God is talking to all of us, even the most "unworthy", if only we'd take a moment to listen."

First...imo, none of us is worthy...there isn't a more or less thing, though some *christians* would make you think to the contrary. I believe you are right about the listening part.

Third...Calista needs to just eat pure Crisco right out of the can.

WOW Look how popular you have become in your first year! From 3 responses to 21 is pretty good if you ask me! And just think of all those who read and never post! (yeah, kinda like me normally)

Congrats on one full year...I sure hope you keep it up! Your writing style is amazing and I have always loved your sense of humor!!