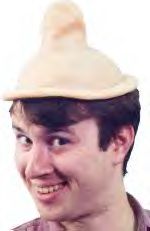 Egan is defending former special education teacher Kathleen Garrett. Garrett was arrested on charges in November 2004 for abusing the children with autism who were in her care.

According to her arrest affidavit, Garrett, who taught at South Seminole Middle School, "intentionally and repeatedly threatened, battered and tortured these victims in front of their peers."

Among the charges? Garrett allegedly slammed a boy's head so hard on his desk that he chipped two front teeth.

She allegedly pushed another child's face in his own vomit as a punishment.

Witness reports says that she allegedly took children into the bathroom, closed the door and screams could be heard from inside.

Early reports allegedly claim that she broke a child's fingers, but I've been unable to find anything further on that.

At least two parents have claimed to have written letters of complaint, but none are in her file. Four teacher's aides claim to have reported abuse to administrators but no action was taken. Two were persistent and assisted police with their investigation.

And here's an ugly fact: "Under Florida law, public school employees don't have to disclose abuse by fellow employees, even though they have to report abuse by anyone else."

An investigation that concluded in June of 2005 found that 6 current and former employees of the school district---2 principals, 2 assistant principals and 2 aides were aware of the abuse and didn't report it to authorities.

I'm not going to grace the evilness that is Kathleen Garrett with one of my weekly Asshats. I believe she has a special spot in Hades waiting for her where she'll get a flaming red hot poker stuck up her ample po-po with satisfying regularity.

Nobody messes with God's kids. You can't run. You can't hide. In the end, it will come back to you. If her Karma plays out, she'll come back as a dung beetle in her next incarnation.

And I'm not awarding the Richard Cranium Award to her attorney simply because he is representing her. We are a country of laws and everyone is entitled to a defense.

What makes Thomas Egan so reprehensible are the reasons why he made a successful motion to have 5 teenagers with severe autism testify against their former teacher.

I don't actually have a problem with the kids' testifying---I think that as citizens they should be able to have their day in court by whatever means necessary.

It's Egan's reasons that have my panties in a bunch:

He said it was vital to have the jurors see the children Garrett had to supervise.

"One of these kids actually eats his feces," Egan said. "I think the world will see volumes when they see these children."

So f*cking what, Dickhead? Does that mean these children deserve to be tortured?

Garrett was employed as a SPECIAL EDUCATION TEACHER! She was entrusted with the care of and paid to take care of children who had extraordinary needs!

If she wasn't up to the job, she should have gotten out of the goldarn freaking career and worked as a bouncer at a leather bar or something!

Children who have disabilities are entitled to a free and appropriate education in this country, as is every other citizen. We (the parents) pay taxes too.

The fact that our children have issues (some unpleasant), doesn't justify abuse by those who are charged with educating them, no matter what Thomas Egan implies.

Here is a link to the latest article. If you scroll down the page, you'll find links to the whole case from the beginning.

Autistic Students Must Testify In Abuse Case Against Teacher

how do people like these qualify to become protectors and teachers of our children?

simply shocking that no-one has done anything until now.

I am horrified at the cruelty, heartbroken for the children and their parents and amazed that only she is in court. Those who hid her crimes by their silence should also be on trial.

Your idea about her coming back as a dung beetle is a good one. I say cockroach so someone can squash her with their shoe.

Those poor kids. She should be locked up forever.

Preach on SISTER! I can tell you, being a teacher is NOT for everybody! ESPECIALLY a special education teacher! However, if you choose to take on that responsibility it would make sense that you could be able to control your temper. I make ever effort to treat my students EXACTLY as I would my own children. ( Or, better yet, how I WANT my own children treated!) That is not to say, I will not discipline a child if necessary. However, public humiliation and abuse have NO place in the classroom! That really sickens me. I am teaching an inclusion class this year. (Special ed kids mainstreamed with regular ed kids) While I do not have any with that severe of needs, I do have some that need special consideration. It can be difficult at times. But, no one ever said being a teacher was supposed to be EASY! Shame on her! Karma is a bitch!!!!!!!!

PS: GOD help her if that had been one of my children!
I would have had to put on the bunny slippers AND a cotton robe! :)

People like that need to be taken out to back alleys and beaten within an inch of thier lives....

You know, just about the time I start returning to the idea that maybe the world isn't as bad as it seems sometimes, there's one of those. Sheesh.

give me 5 minutes with that woman and her fucking ass hole lawyer.

This is absolutely repulsive! Where do you find this shit? Special Needs kids sometimes don't have a voice to be heard and there parents need to be more involved to protect them against monsters like these!

This is the quote from the linked article that bothers me most:

"Garrett, 50, rejected a plea deal this week that would have placed her on five years' probation and required her to surrender her teaching certificate."

First off, how in the hell does the DA justify offering this deal? No jail time?

Second, how does a person reject this offer? Again, no jail time?

(this is, of course, presuming guilt...I know we don't do that in this country, but I'm going to go ahead and run with the presumption)

I checked out the link. This story not only sickens me, it made me teary. I don't think it's a case of her "not being up to the job" - I'm betting she enjoyed torturing those children. Pure evil. Sick and evil.
Like "Scully," I'm bothered by the rejection of the plea. Does this mean Garret and her attorney feel they have a good chance of winning the trial? God forbid.

i want to throw up at the mistreatment this children have suffered, and now this asshole attorney is going to basically screw them on the stand for his client's gain?

I work and have worked with a lot of autistic kids. This is barbaric. The kids who are the most severely impaired are all the more entitled to our compassion. I agree that the defense attorney deserves your reward for implying that because the kid has problems makes the woman's behavior more understandable. Maybe if a parent went over the edge. . . but the teacher is paid and wanted to do this job.

"Garrett, 50, rejected a plea deal this week that would have placed her on five years' probation and required her to surrender her teaching certificate."

Does that mean she actually expects to get another teaching job if she is acquitted? What does that say about the public education system in Florida?

There's more on this story on the Autism Vox blog.

Hi Attila,
Thomas Egan and Kathleen Garrett are two more dick heads to add to the ever increasing pile of manure that’s passed off as human beings. Thomas Egan should be disbarred from ever practicing law again and Ms. Garrett should lose her teaching credentials ASAP. Between the two of them, their IQ’s probably don’t exceed that of a squid….certainly their capacity for any semblance of human compassion is nonexistent.

News like this makes me sick at heart. I can't imagine the horror and pain those children must have been through on a daily basis with that woman as their teacher.

"The 6-foot 300-pound Garrett had pictures of herself partially clothed on her own bondage website." Holy crap. Don't that sound inviting?

And Willie Shake was right. Let's kill all the lawyers and kill 'em tonight.

Sick! Sick! Sick! I agree with st jude, not only should Garret be in court but also those who turned a blind eye. Jesus, I thought this kind of shit only happened in Ireland - the "religious" abusing and those in authority turning a blind eye.

My daughter has special needs and I know what I would want to do with anyone who abused her. I hope she fucking gets what's coming to her!

If I ever need help in the butt-kicking department, you are the first person I'm calling. Shred, shred away, my friend. You are a clear, loud voice for those who have been wronged.

Yeah, OK. That was quite possibly one of the most unpleasant stories I've ever heard, to wit:

Nasty child abuse. (WHY do people do such things?)

Never mind a link, where's her address? I've got special things in my shed for people like that . . .

OMG! I say we have him eat his faeces to be punished for that remark!

Things like this happen all the time. Some similar but not as horrible mistreatment happened to me, and... it was bizarre. Most of the other kids had cognitive disabilities or didn't speak English, so no one really could tell on the teacher but me.

When I told a guidance counselor, I was scolded and told that I shouldn't say things like that as part of a personal vendetta, that I needed to realize someone's job was on the line.

I said I knew that. I said all I wanted was for someone neutral to come in from outside and observe what she was doing and determine whether it was really mistreatment or just extremely unpleasant. I thought that sounded reasonable.

Any of you bother to follow the actual trial? To hear the true evidence presented at trial? I bet not. THe witnesses testimonly did not jive with the police reoport they filled out, their stories were totally different from each other. The Judge said there was no evidence to support the claims of abuse. This woman was ripped apart in the press and on sites like this without anyone having the facts, all of the facts and not just hearsay from the media and other idiots. Shame on all of you for not thinking for yourselves and doing following a mob mentality. Jut think here, THIS COULD HAPPEN TO ANYONE ONE OF US, a neighbor or child mad at you over something and they say you abused a child. You should thank whoever you pray to that it wasn't you and that the judicial sytem actually worked. Think for yourself people!

Kathleen, is that you?