Bringing Back a Little Spontaneity

I can't remember the last time Hubby and I decided to be spontaneous.  When you have kids who have issues, everything but a trip to the store needs the logistical military planning of a major invasion.  Even though the guys are grown, it's still nearly impossible to just drop everything and take off.


Last year at about this time, Hubby and I drove across the state to pick up a toy Aussie Shepherd puppy.  Little Guy was away at camp, and Big Kid and Kitty came to watch the house and dogs.  We had planned this trip far in advance, working with the breeder and working our schedules around this.


Matilda, our large Aussie, is aging.  She has doggie lupus, and some hip problems which have been exacerbated by rolling around with and playing with Maddie, the puppy.  We had discussed getting another puppy to keep Maddie entertained and as a companion for when Matilda finally and inevitably goes off the the Rainbow Bridge (why oh why don't dogs have the same lifespan as people?)  We had just planned on doing it in another year.


I saved the website of Maddie's breeder and look at it occasionally to see the new puppies.  I have to admit it, I'm a puppy junkie.  I looked at it Friday afternoon, because we had just brought Matilda back from the vet with a ton of meds to ease her hips and had puppies on the brain.


And promptly fell in puppy lust.


Called the Hub and said, "what if?"  He looked at his schedule and said, "well, I might be able to get away August 15th."  So I called the breeder to see if the puppy was still available.  He was, but just...there was a lady in another city who was interested, but had been kind of dithering for a couple of days.  Maybe she thought the breeder would come down in price, or just wasn't sure an active puppy would fit in her lifestyle.


Saturday morning, we got a very early call from the breeder.  The other lady had called the night before and asked if she could drive down to see the puppy.  If we wanted him, she would take a deposit from us and hold him (these puppies go incredibly fast).


I looked at Hubby and said, "do you have to work today? What about tomorrow?"  He didn't, so we bribed the Aspiring Adult to sacrifice his day off to stay with Little Guy, and talked Big Kid and Kitty into spending the night.  It took all of 10 minutes.


Then we threw ourselves into the car and went on a road trip (6-hour drive).


We made it back on Sunday night with a new addition to our family. 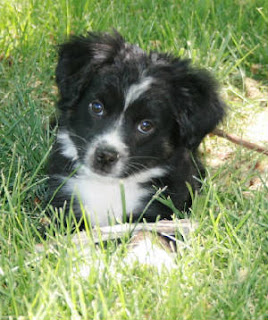 Of course, on Monday morning, I woke up with a total "WTF did I DO?" moment.  LOL


But after 10 minutes of playing and holding the little guy (he's completely potty trained and went right outside to do his business and went off to play with his new pack), I knew that at least THIS time, spontaneity was a wonderful thing!
Posted by Attila the Mom at 5:35 AM

He is utterly GORGEOUS!
Well done on the impulse. I am puppy mad too, but we make our own now!
Well... Coco and Mac make them... I just get to enjoy them.