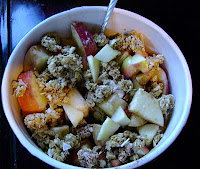 One of the (snarf) bonuses to having an AOL account is the Welcome Screen. It's there to tell us what's hot, what's not, and still employs the same unimaginative dorts that think that putting "Iconic" in 20 headlines at a time is "new and edgy and relevant".

The latest thing that has caught my eye is "The Pantry Project", hosted by Kitchen Daily and features the creations of chef Gail Simmons. It's supposed to incorporate crap you've got sitting in your pantry into gourmet culinary masterpieces.

While her recipes look splendid, I found myself snorting at the "pantry" ingredients.

I think I'm a regular mom (ok, I'm going to say a United States mom. Don't want to offend anybody outside of my postal zone. US moms don't usually stock stuff like Vegamite or kippers or dried shrimp with the eyeballs still on in our pantry). Other than my forays into some international cuisine, my pantry is full of regular old crap staples and products that didn't fly with the guys in my house.

Many of the "pantry" ingredients called for in these recipes are laughable, unless you're squatting in Martha Stewart's kitchen.

I mean who REALLY has stashes of:

Imported tuna in oil (I buy whatever is on sale. Is Bumblebee tuna inferior to imported or what?)

Coarsely cracked balck pepper (What in the heck is balck pepper? Ok, I'm being snarky. I think she meant black pepper). I have regular pepper. The kind that comes out of a shaker.

Do any of you have stuff like this languishing in your cupboards (unless you're Rootie or Werner)? It seems that you just have to go out of your way to buy crap you'd never buy normally unless they're for a specific recipe.

Not really stuff you'd have just sitting around.

The Aspiring Adult came home the other day and raved about the baked apples he had at a girl's house. Asked if I could make them.

Thinking about all random stuff I had in the fridge and pantry, I said "sure, why not?"

5 apples, diced---3 of them have been stuck in the back of the fridge since sometime in August, because the doods in my house eat the new stuff first. I suppose I should rotate the fruit and put the old stuff in front, but I always forget. I left the skins on, but cut out the bruised spots.

1/2 a cup of butter, margarine, fake bakeable butter, whatever you got going, chopped into chunks or spoonfuls and dropped randomly in the bottom of a small casserole dish.

2 teaspoons cinnamon sprinkle all over and toss the apples

1/2 cup brown sugar, light, dark, doesn't really matter. Mine was dry and solid, so I pounded it into chunks and threw it in.

2 tablespoons (or to taste) white sugar or splenda sprinkled all over.

A couple of granola bars---I used the crunchy kind. They've been sitting in the pantry forevah---since the guys suddenly decided they only like the chewy kind which I think was a year or so ago. Break them up and mix the pieces in with the apples.

5 caramel squares that have been sitting in the back of the cupboard for (dare I say it) at least a couple of years when I attempted to make caramel apples from scratch (big mess, nasty result). They are rock hard.

This dessert turned out so well that while I was down here writing it all up, those boneheads ate the majority of it. When I came upstairs, there were like 2 tablespoons left.

I challenge any reader to go through their pantry and whip up some creation. Can be just about anything...entree, dessert, appetizer, etc.

Send to me via email hugyourkidz@aol.com:

A picture of it
The text of the recipe explaining where the ingredients came from, why you bought them originally, and why they are sitting around in your pantry
A link to your blog
The deadline is Nov. 1st

A can of ancient tomato soup with crusty goldfish crackers, or a box of Tuna Helper with a can of peas don't count.

I'll post them on this blog and send the first five entries a fantastic ornament from our Collaborative Craft Studio (due to availability it will be my choice).

Get cookin' Snookins'!
Posted by Attila the Mom at 3:51 AM

Since you mentioned my name and I actually *do* have a botte of sriracha and applewood smoked bacon (thick sliced o yeah)AND I buy balck pepper-it's not a misspell, it's from the Balckuns- am I disqualified?

Sriracha is a type of hot chili sauce, thick like ketchup, with a bit of garlic in it. It's South Asian (Thai I think, but not sure)

and the bacon? Once you've tried it you'll never go back to regular.

Oh and the apple crisp recipe? With caramels??? GENIUS! And the granola bars?? GENIUS! I would never have thought to put petrified caramels but seriously what a fantastic idea!!

Hydroponic watercress? My supermarket has a huge produce section, but I don't think they carry that!!

I do have a few of the items you mentioned. We love Sriracha, especially on eggs (scrambled, fried, omelets, deviled eggs....), it's super spicy but really tasty. I also buy peppercorns and grind them in a pepper grinder. We put pepper on everything.

I've bought applewood smoked bacon, but it's a lot more expensive than standard bacon, so I don't have a few pounds hanging around in the fridge at all times.

Preserved lemons? No. I'm an adverturous cook, but I have no idea what I would use them for.

Your apple dessert sounds delicious! I would never have thought to use the caramels. I don't blame your guys for devouring it!

I love your contest! I wish I had known about it last night, I made a few dishes that would have been eligible, but I didn't take any pics. I'll be sure to send you something today or tomorrow!

Well, I looked and I don't think a couple of cans of Progresso soup and a package of Ramen Noodles would be the winner you are looking for. Oh well, at least I got planning tonight's dinner out of the way early.

I would totally participate in this if I had more than chick-fil-a sauce and some old diet yogurt (that is probably expired) and some olive oil. That is it. My kitchen.

There are also napkins.

Clearly I am not a chef.

Lurking in my pantry is: unsweetened coconut flakes, coconut milk, and coconut oil. nori, pork fu, 2 cans of mushy peas Terry brought back from England that I can't get up the nerve to fix the way the guy in England told him ("add herbs and cream and shit" he was told). I have aduki beans, Israeli couscous, and um...an egg. "Why can't you buy anything NORMAL?" is a common complaint. Oh and some *very* green cheese. And horseradish, ginger and half a jar of extremely hot chowchow. And a can of Coke Zero.

I had a can of black beans, corn, and a can of Progresso Santa Fe style soup. i heated some olive oil and garlic in a pan with some chili powder, dumped in the soup, corn, and beans and heated up. i served with some chedder cheese (technically from the fridge, not the pantry) :) pictures on my flickr account

Like you, I have the bacon. Little else. Who needs it when there's bacon?

That is awesome! I am very impressed with your creativity. I wonder if you could bread chicken with Pepperidge Farms fish crackers. We have an abundance of those....and fruit snacks.

Yes to the preserved lemons, and I do crack my own pepper and smoke my own applewood smoked bacon.

As a matter of fact I'm getting four bellies to smoke next week as well as a ham to hang.

Oooooh! Sounds like fun! Love the dry brown sugar pounded into chunks! A laugh (or 5 or 6) is a great way to start the day :o) If I can manage not to get called for subbing all next week, maybe I'll get creative....

Your baked apples sounds amazing-- and I'm pretty sure I have all the stuff in my pantry, including the rock hard, ancient, caramel.

I'm ashamed to say I just cleaned my cupboards out a few weeks ago and took all the crazy stuff to the food bank-- black beans, Rice-a-Roni, Spam (I actually had a can of that stuff!), many, many cans of jellied cranberry sauce, Cream of Wheat and 4 bottles of bbq sauce so chances of me puling together an edible recipe are slim to none, but if I can figure it out in the next week I'll let you know.

And I love that Rootie has all that stuff in her house, including balck pepper, and actually knows what it all is!

We're supposed to have this in our pantries?! I don't even know what that is.