No Angel or Keep Your Bones to Yourself 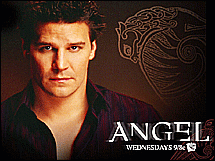 The question came up when Tiger Woods' infidelities came to light. Now it's come up again and it's bugging the heck out of me.

First of all, shame on you, David Boreanz. You're a real prince. Not. Coming clean in public about multiple affairs (and calling your girlfriend while your wife was giving birth is especially heinous in the halls of douchebaggery) to avoid being extorted doesn't mitigate what a dirtbag you are.

That said, here's what's been boggling my mind.

One woman, who Boreanz allegedly "hooked up with 2 or 3 times", started asking him for money. She hired Ho to the Ho's attorney Gloria Allred who contacted his attorney and demanded a 6 figure payout.

Oddly enough, Allred represents another one of Boreanz's alleged rolls in the hay in a similar case against Tiger Woods (Allred is representing several of Woods' alleged flings in monetary suits). Apparently Woods and Boreanz both rode this particular hobby horse (although not in the same room). ugh

What I want to know is under WHAT legal theory Allred is basing these claims on?

I could see it if one of these sisters was successful in her quest for celebrity seed and was filing a paternity suit for child support. Ugly, yes, but she'd have a legal claim to a piece of the pie.

But if it's money to keep quiet about the affairs, then isn't that blackmail or extortion? Which is illegal, of course.

Or if it's money for "services rendered", isn't that prostitution? Sleep with a celebrity and you're entitled to get paid? Again illegal, at least in 49 states.

Although she herself is a ho of the first order, I can't see Allred, as an officer of the court, demanding illegal settlements in cases that are so much in the public eye.

So what in the world is her legal theory regarding these claims?

Anybody know?
Posted by Attila the Mom at 6:26 AM

I do not know...and I have wondered this too! I just don't get it.

Sorry, I don't know either. I completely agree with you, it sounds very illegal to me.

Have a good one.

I thought the only thing they had to bargain with was photos or videos that they would not want to get public. But then again all the publicity doesn't seem to hurt anyone, any of the parties.

I try not to know anything about any of those celebrity hos,,,the male and female ones. The lawyer ones are the worst of the lot!

I do wonder, though, what it is about actors that they can't keep their bits and pieces in their respective pants.

I've no idea, but that's a good question. The entire thing just skeeves me out.

It's called "spotting an opportunity to make money", and from what I can make out, is all a merry part of the American Dream...

In the UK, they just go to the newspapers to make as much money as possible

I dont understand what this means:
" She hired Ho to the Ho's attorney Gloria Allred who contacted his attorney and demanded a 6 figure payout."

Because you are so irate, we then must assume the rest of the public is equally irate therefore celebrities cannot reveal that they are sexual creatures. They have to appear asexual and so they have to pay the piper.

Its absolutely incredible that a great golfer is judged totally on his sexual habits. Just so american.

My 2 young neighbors had an adulterous relationship. He is back in the buson of his family. His wife forgave him. Her wife beat her up and she assumed the scarlet letter. American life is crazy.

I couldn't give two poops about celebrity sex lives. I was appalled at Woods' groveling for the media---IMO, the only person he needed to ask forgiveness from was his wife.

I just want to know WHY these women think they are entitled to money for putting out.

As for my "ho to the ho's remark"---Gloria Allred is a notorious media ho who shoves her face in a camera every chance she gets.

I give up as to interpreting the sexual habits and rationalizations of the rich and famous – and their hangers-on. Or for that matter, anybody’s!

It is all totally ridiculous and I don't get it either.

The whole thing is so stupid. She has no legal grounds for money, unless she is pregnant. I'd hope the women would run for the hills, as their EGO's are so big, that I doubt this behavior would stop. It seems the only thing they are sorry about is getting caught. So many of these women are now on the talk shows, doing interviews, like they are famous........It is all so disgusting. I guess it's their 15 minutes of fame, no matter how down and dirty. As for the men, I won't even go there, not worth the time.
Just gross, the whole thing.

I agree with you about Gloria Allred!!

Sometimes it seems like the "celebs" have the morals of alley cats...or worse. And then being PROUD of their behavior?? WTF?