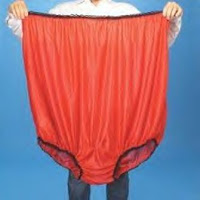 I was browsing through AOL's headlines when I came across this article regarding Celebrity No Pants Day.

Is this a joke? I looked all over for a disclaimer, but didn't see one.

Most of these people I can see dropping their drawers for whatever reason. They don't need a reason. They're ho's.

But Oprah Winfrey---who could arguably be considered the First Lady of Television? It's like seeing Queen Elizabeth in a thong. Improbable and I have a hard time believing that she'd do something so lacking in dignity.

The one that really baffles me is George Clooney. He must have had one hell of a manscaping job, because, well heck---I'm envious at how smooth and taut his lower half is. And he must have microscopic testicles, because he just ain't carrying a package down there.

What do you think? Fake?
Posted by Attila the Mom at 6:25 AM

Some fake? Some real?
Whatever - good for a smile and chuckle to start the day!

(George's pants-free pic has GOT to be fake...)

I think they're all fake. April Fools.

I hate to sound all braggy...but George was definitely photoshopped. Trust me;)

Yip, George has definitely been 'shopped, but I have it on very good authority that he does own a pair of pants just like that. No really ... tee hee

I think it might just be an April's Fool posting day!

Today? I am Dana Scully.
"Trust No One".

Have you seen the prank that the founders of No Pants Day pulled?

So fake. But so funny.

The Clooney one is a woman on the bottom. Is George really a tranie?

I also have seen a pic of GC au natural and what I saw was not in those brief briefs!

What a hoot! This has to be an April Fool's joke, right?

All fake mate!
That is a girls body with George Clooney's head!
Oprah's legs are bigger than that!
totally photo shopped.

I can't take much as truth on April 1st. Some people have so much time to photo shop the strangest things. This is funny actually. Hope you have a wonderful Easter.

Hey there lady ... we used to haunt each other's blogs years ago ... I got out of it for a while but am getting back in, and am just visiting some old stomping grounds to see who's still around. Glad to see you are. :)

See ya around! xo

I did not click on the link because, well, I think that there are some things we're better off not knowing. I mean, I've seen Goatse and Tubgirl and wish I hadn't.

I will go further, and say that nobody over the age of, say, 35, should wear Spandex clothing in public.