Back to Our Regularly Scheduled Programming 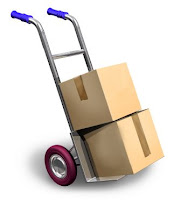 Big Kid is installed into his new apartment. My back is all cattywumpus again, and Hubby accidently broke his new cell phone, but it's alllllllll done.

We had to drag Big Kid---kicking and screaming---of course, to the new place, and he refused to help move his stuff. That was left to Hubby, Little Guy, myself and guess who----Cougar Woman. Yep. More on that later.

The squall continued until we jumped in our cars in the apartment parking lot and made a fast getaway.

Seriously. I am NOT kidding.

I spent the last week organizing and packing as much stuff as I could without actually going into that black hole he calls (called) his bedroom. Little Guy brought out all of the clothes and shoes that were piled up on the floor, and we sorted into what fitted, what didn't, what had holes, what still had life in it, etc. Then I handed in two tubs and a box of garbage bags and instructed the Big Kid to get at it. Put the stuff he was taking into one tub, the stuff he wanted stored into the other, and trash in the garbage bags.

Ha. He was "too busy" organizing his CDs. That took 2 days.

So my hourly mantra became, "Everything that is not packed and ready to go on Wednesday doesn't go unless you make your own arrangements to move it. The day after you leave I'm shoveling everything as is---including trash---into leftover tubs and storing them in the basement. If you come hunting for the one remote control or cord that you're missing, then you'll have to dig through the crap on your own."

I made lists of everything he could possibly need in his new place---some of which we could provide---some which would have to be purchased.

"How come you're sending me with the crappy towels (the ones he took to college which are perfectly fine)? How come I don't get to have the nice ones from the guest bathroom? Nobody ever uses those!"

He was poking through our flatware drawer. "How many of these do I get to take?"

None. We'll get you a starter set from Walmart.

"Walmart? But that stuff's cheap!"

Seems like that turned into my secondary mantra for the week as well.

Sat him down with his budget, the grocery sales circular and the list of things he would need. Some of the stuff we could supplement with all crap I buy in bulk (condiments, salad dressing, cereal, coffee, etc), the rest he'd have to figure out what he could get for the rest of the month that would fit in his budget.

Everything he had left over would be his spending or "entertainment" money for the month, and I made it crystal clear that this well is dry and after paying all his bills for the new place, there would be nothing more coming from us until next month.

So we went shopping. Ground meat was on sale for 50% off, so I caved in and "fronted" him a little extra money from next month's budget. We bought about 30 lbs of ground beef, Italian sausage, ground turkey and ground pork. Cooked it all up with onions and peppers in batches---one for Italian, one for "regular" and one for Mexican (taco seasoning and beans, etc, added). Froze them in one-pound-sized increments flat in zip-locks. That way, if he wants tacos, or pasta, or Hamburger Helper, all he has to do is thaw a bag. Storing half of it in our freezer here, but it should last him for next month as well.

The apartment is surprisingly nice. It's right at the bottom of the mountain, so in a pinch, we could be there for him within 30 minutes barring bad weather and traffic. The complex has some kind of state contract (not section 8) that must provide affordable housing for every income bracket. Since we're only going month-to-month, there are some extra fees added, but I was amazed that it wasn't a sh*thole (like most of the month-to-month places). They have a couple of pools, 24-hour security and maintenance, a business center, rec center, etc.

He's got a one bedroom with a huge walk-in closet, and it comes with a fireplace and a microwave. The place is freshly painted, the carpets are almost brand-new. Only a couple of things to note on the damage report (permanent scuff marks on the linoleum in the kitchen and bath and a dent on the heating register). Unfortunately, the previous tenant must have had cats in the walk-in, because even freshly shampooed, the carpet in there smelt of cat pee. The management is going to pull the carpet out of there early next week and replace it with linoleum.

By the time we got everything moved in, Big Kid was working his way into a state. We had borrowed a truck, and the plan had been to hit all the Goodwill/thrift stores (there's a row of about 6 close by) to grab a couple of end tables, maybe a night-stand, and a small table to put his computer on. Oh, and some glasses and dishes. He refused.

We said "arrivaderch" and high-tailed it. After lugging an oak kitchen table/chairs, a couch, bed, dresser, computer/stereo/video gaming crap and multiple tubs of stuff up a flight of stairs while he basically sat on his behind, we'd all had enough already. We thanked Cougar Woman for her help and got the hell out of there.

Speaking of Cougar Woman----I have to say she's growing on me. I don't really want to call her CW any more, because it sounds kind of predatory, but I'm not sure how to refer to her in my blog. Any ideas? Will explain more soon.

Took the Kid about a day to realize that he kind of likes having his own place so far. Called to thank us last night.

Except in Little Guy's room. He's in there singing what has been become HIS mantra since yesterday afternoon.

Yikes. Better get that nipped in the bud fast. But he deserves a day or two to sing his head off. He's earned it.
Posted by Attila the Mom at 5:20 AM


Sounds like it went well, despite Big Kid not wanting to actually help. Is he still going to school?


And little guy deserves a week of singing at least.....:D

Whew, I'm tired from just reading all that.

I've got my fingers crossed that this will work well for everyone. I'm so hopeful reading this blog! I worry that my own son will never be able to be independent. You've given me a whole new hope.

I'm also really glad that the cougar is growing on you. How about calling her Kitty? Nicer than a Cougar, lol.

How about just calling her CW?

I am adopting the Little Guy's mantra-even though it isn't true.

Sounds like the move was traumatic, exhausting but successful and worth it (his call of thanks). Change is difficult for all of us - especially so for the Big Kid. You've given him a wonderful start in life - in every way.
And, yeah, Cougar Woman no longer sounds right. She doesn't seem predatory.
"Lady Friend?" (kind of lame...)

What a week you've had, Attila. Lord love you--having to stand firm AND do all the work to help your son move out and get on with his life. Good mantras, however. I think you should join Little Guy in the singing. With martinis for you and a massage. If I lived closer, I'd get out the shaker and book that massage for you.

Also? Kind of off topic, but...I know college kids who have the exact same attitude about getting used/cheap vs. brand new--like somehow at 20 you deserve the same living conditions as a 40 year old who has worked for 20 years and earned it? Yeah. That ticks me off, but do know it's not just Big Buy who has that entitlement attitude.

LOL... I'm 40ish and still using mom's old donated pots and pans. How pathetic does that make me?

But Just Bob, when you reach our age and still have Mom's stuff, just call it RETRO and we're cool again!

Hi Attila,
It sounds like cougar woman was your family’s version of the Federal Emergency Management Agency (FEMA), the United Nations, The American Red Cross and The Salvation Army in getting Big Kid out of the house and accepting some adult responsibilities. Is CW planning on sticking around to guide him through the transition?

I hope it all works out….at least you’re relatively close if something untoward occurs. Now you can concentrate on redefining your family of three!

I like Little Guy's mantra :-)
I still have some of mom's old stuff, plus stuff my sister's gave me when I got divorced and got my own place (when I become free to do what I want! hehe). Personally I was glad to have it - saved me the trouble and expense of buying new stuff!

I vote for "Kitty" also

Enjoy the peace! You have EARNED IT!

Eh, I've been thinking of you all week, and send best vibes to you and yours for this arrangement to work well :-)

just a thought, let's call 'er Betty. It conjures up a CW to me, the type that can put her lipstick on with a ciggy hangin' off her bottom lip. non?
apologies to others who may be called Betty, which is of course short for Elizabeth, a most regal name. CW Betty is NOT an Elizabeth.
just trying to help. :-)

Hope you will all find peace, it will be well deserved! I love Little Guy's mantra, too cute!

I know this was the right thing to do and I am so glad it happened, despite the struggles. I have to say again how much I admire you (and your two mantras) because on some level this had to be a bit scary. Please let us know how big kid takes to living on his own and having to be responsible. I have a feeling it will be a turning point.

Little kid cracks me up. Hug that kid.

As for CW, how about just CW or the new woman in big kid's life. So interested in hearing more about that.

Take care of yourself.
XXXXXX

I remember moving out. I didn't have any comfy furniture. I did have a card table with some folding chairs for company. They didn't stay long. I wonder why?

Congrats on getting the move handled!

I hope you have a great weekend!!
Hugs!!

I like Kitty, for us in blog land. You'll probably have to call her by her first name.

When I was living with the She Devil and my son, I told him the "get a job" line more than once. And, he doesn't have the challenges that Big Kid has, mine's just lazy and has a sense of entitlement.

I vote for "Kitty"

And, I like Little Guy's theme song. I try to apply it to my own life on a regular basis. At least when I don't have to go to work.

whew! Glad you all made it through the move and that he's doing well in his new place!

You actually make it seem so easy with your presentation but I find this topic to be really something which I think I would never understand. It seems too complicated and extremely broad for me. I’m looking forward to your next post, I will try to get the hang of it!
skip bin hire ipswich
Skip bin hire Brisbane