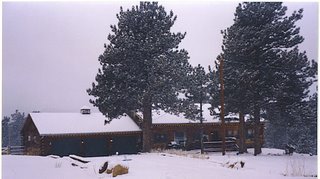 Note: I don't know what happend to our gasbag reviewer today, so....


As much as I love our log house, there are a few interior things that I really dislike about it.

It was built in 1984, and it was one of those kit log homes. Meaning, the original owners took a look at a set of log houses, pointed at one and said, "build that on my 2 acres of mountainy property".

It's a great house, and although it's pretty large (it doesn't look like it, but we're on a slope and it's 4500 sq. feet on 3 levels), it only has two bathrooms. My husband's and the one for the rest of us, guests included.

Before you think that my husband is some kind of selfish bonehead, I promise that he isn't. Except when he throws his pillows on the floor by his side of the bed and yanks mine out from under my head. And steals all the poofy down comforter bits from INSIDE the duvet cover and leaves me with an empty flap.

Don't ask me how he does it, and I don't give a rat's patootie that he's unconscious when he does it. I'm blaming him anyway. And he has really scary feet and tries to play footsie with me.

That said, the tub/shower in the master bathroom is a disaster. It's one of those really narrow fiberglass one-unit jobbies with sliding glass doors that make it impossible to take a relaxing bath. And since the outer finish has worn off in places, it's like sandpaper on the keister to sit in.

Plus the bathroom is small, and hubby needs a lot of room for his "stuff". He'd be offended if I referred to him as a metrosexual, but between you and me, he'd give Tammy Faye Baker in her PTL heyday a run for her money with all the tubes, bottles, clippers, razors and cans of crap he has to have room for.

I guess it would help if he actually threw away the empty containers (last time I took a shower in there I had to shake 3 empty bottles of shampoo and 2 empty bottles of bodywash. The water was practically cold before I found anything that was partially full!), but hey, he always looks---and more importantly, smells---terrific, so what's the price for beauty?

OMG, I'm talking about the guy as if he was a himbo! Well, at least he's MY himbo!

In the meantime, although the guest/boys/my/all-purpose bathroom is larger, it was obviously built in 1984. Peach ceramic floor tiles. Peach mosaic counter tiles. Add almond sinks, tubs, toilet, and light wood walls with light oak cabinets and eek eek! It's a study in bland. Oh, and it also has one of those disgustingly narrow tubs (though not fiberglass) with sliding glass doors as well. 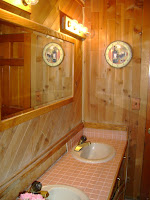 No nice ledge to balance a glass of merlot or a couple of candles on while trying to escape from the incessantly needy yapping hairballs who inhabit my home.

Or the dogs, who are pretty damn noisy, too. Hmph.

So for the last few years, I've been planning a fantasy redo of the bathroom. The first thing I wanted to do was get rid of the hideous pastel peach mosaic counter. I dreamed of Corian, and got dozens of samples from a local dealer.

The ceramic tile floor, while peach, is actually pretty darn nice. And would be expensive to tear up and replace, especially since it's in great condition. You know me, I'm cheap cheap cheap! 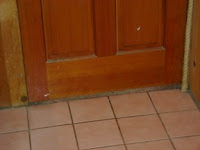 So I needed to find a Corian counter color (say that three times fast!) that would go with the light oak walls and cabinets and peach floor.

Damned if I was going to go with the seafoam colors. That would date it back to the Macarena and Achy Breaky Heart era. Didn't want to go with the dark green, either. Most of my house is already done in navy, burgundy, gold and dark green. Peach just doesn't figure into that particular equation.

So first I went with light Corian colors---like Abalone, but that seemed like it would wash everything out. 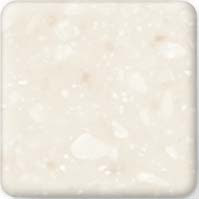 Then I looked at something that wasn't seafoam or dark green. This looked too much like baby poop. 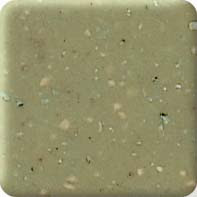 Just as a side note---why in the heck would someone choose a style like the one below? If you're going to spend the money on Corian to try to make it look like real stone, why choose something that looks like formica? 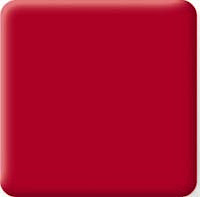 Then again, I can't figure this color out either. Unless you were outfitting a frat house. At a very very VERY expensive college. Why else would you choose a counter-top color that looks like somebody puked after a pep rally? It's got chunks in it! 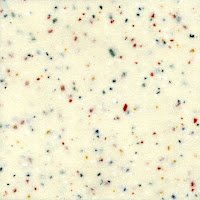 I got my heart set on a color called Pompeii Red. I'm not putting it up here, because for some reason, it looks black on the computer. It's a very dark dramatic red with orange undertones. It was perfect for my dream bathroom! I've been carrying the sample around for a couple of years, just in case I find the perfect shower curtain or blinds to match it! 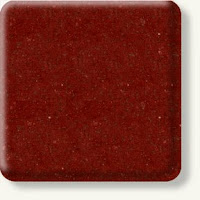 Update: Christi found a sample online that isn't quite as dark as the others. This still looks darker than it actually is, and you can't see the dark orange flecks in it, but's close enough for gubment work!

A couple of weeks ago, it finally happened! That crappy peach mosaic countertop has fallen into bits.

No, I didn't help it along with a hammer or anything. I promise.

Blogging buddies Carmachu and Dorky Dad helped inspire me with their awesome bathroom project pictorials. I got that new digital camera for Christmas, and I've become a monster with it!

This is already too long, but work starts tomorrow on my new bathroom. Woohoo! I'll go into part two soon...

As an odd/interesting side note to my adoption triad friends----on my birthday last week I was telling my birth mother about the plans to redo the bathroom. She mentioned that she was looking to get new Corian counters in her house as well---and had found the perfect color.

How's that for synchronicity?

It's a lovely color, and I can actually visualize how it'll look with the floor. You're braver on colors than I am; I'm neutral all the way. Sometimes I'd like to add some freaky color, but then I worry about hating it in six months...

In the next part I'll be telling the :::koff koff::: rest of the story.

No Corian for me. Dammit. [sniff sniff]

We're getting ready to build a log cabin in Utah this summer ...
just seeing that cabin in the snow is getting me all excited.

can't wait until you post the remodeling pics. how long is it going to take? is everyone going to hubby's "throne" to use while the current bathroom is in remodel stage?
inquiring mind wants to know! ;)

Okay, you lost me at Corian! This is the EXACT reason I had to buy a brand new house.....we are the world's most pathetic fixer uppers! Our first home was older and had a lot of "character". That "character" stayed almost exactly the same until right before we sold it! 4500 square feet, that is a great size! I'm with you on the bathroom thing. The next house I live in will DEFINITELY not have my children's bathroom and the guest bathroom being one and the same! UGH! Especially with boys! Their aim is *ahem* not always as it should be! Good luck with the improvements! Can't wait to see the finished product!

i went to google images to look at Pompeii Red. it's an awesome choice! i like!

Your life mirrors mine. Two bathrooms - and one female in a house full of men. Some mornings I lie in bed waiting for a turn! My husband doesn't steal the duvet - he gets too hot (I'm talking body temperature here) and throws his half over me. We refer to this as me getting "double-duvet-ed." I wake up gasping for breath I'm so hot. (Again, body temperature only).
As for the Pompeii Red - looks good - and so bizarre (or not?)as to your birth mother choosing the same colour.

Was caught up with new twins in the "family" and was at the hospital with a friend in need much longer than expected.

Hi I found your site via your friend's Because It's Personal. I also keep a blog which is quite different from yours. I'm at gledwood2.blogspot.com and you're most welcome to drop by. I'm making a note of your url so I can come back. You've got some quite interesting stuff here. All the best now, take care

Just to let you know, Jeanette (who calls herself Mom26children on her blog) will be appearing on Extreme Makeover Home Edition on Feb. 18 (in the US).

She has six children, five of whom are autistic. The family really needed a new house, and I'm glad they were fortunate enough to be chosen for the show!